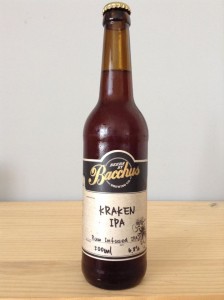 “For this special edition IPA we’ve taken our ever popular Fighting Falcon IPA and blended it with Kraken Rum. The blend of tropical stone fruit and citrus from the IPA infused with the spicy dark rum is truly a match made in heaven”.

Served in an IPA glass. The only slightly hazy amber pour offers a soft candy red hue when held to the light. On top a billowing three finger head is generated which maintains brilliantly, weaving a wavy lace pattern down the walls of the glass. It has quite an interesting aroma to say the least. Out olfactory’s are tuned in to this sharp citric funk/almost sour lemon character initially. Thank god for the dark, sweet and spicy rum notes that gradually get bolder as the beer settles in the glass. Now we can get more of the orange peel, grapefruit, papaya and caramel malts with the IPA/rum fusion becoming more clear. Interesting….It’s a constant evolver. The mouth feel is well rounded and oily with an assertive bitterness forming at the rear. The 6.8% ABV displays a gentle burn but mellows out smoothly. Medium-full in body with a mild-moderate Co2. Upfront the contrast between the bitter hops and orange peel and the sweet, caramelized rum accents is excellent. A sharp pithy dryness spiked with a delicate booze burn presents in the middle delivering a very dry and bitter finish with soothing yet subtle sweet malts and spicy rum on the back end. It’s a tough one to sum up. On one hand it’s super crafty and fun but on the other it’s nothing like what we expected. If we were to criticize it would only be that the rum doesn’t feature as well as it could have, leaving the assertive hops to run rampant. Not bad, still a lot to like about it though.