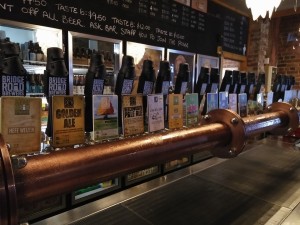 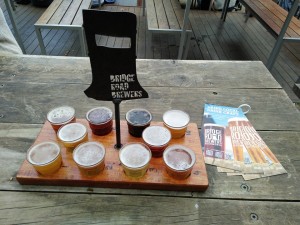 The final stop on our Victorian brewery pilgrimage was bittersweet to say the least! For craft beer lovers, Beechworth is so much more than an historic 19th century gold mining town known mostly for its own brand of honey and the court house that Ned Kelly was sentenced in. It possesses something that most rural country towns don’t…their own award winning, nationally recognised and highly respected craft brewery – Bridge Road Brewers. Behind the ever growing success are owners Ben and Maria who started the brewery in 2005 at Ben’s parents place on none other than Bridge Road, about 500m from where the brewery is now, on the same street, but surprisingly it changes names at the Bridge. Beechworth Brewery as a name was taken at the time by a brewery that didn’t eventuate, and is still held to this day. The head brewer, Steve Matthews, and his two assistants brew 6 days a week out of their 25Hl onsite brewhouse and the hectic brewing schedule is immediately evident as you walk in to the bar and witness their super impressive 18 tap set up. So it’s only natural with that many beers that their paddle consisted of 10 cheeky samplers! The 10 are already designated but we subbed a few to match our palates. First up was the Hefeweizen which was in the traditional style with subtle banana, spice and herbs on the nose. It follows on from the nose with a light, herbaceous finish. The Golden Ale had soft citrus and sweet malt perfumes with mild body, citrus and a crisp finish. The Chestnut Pilsner was very bright in colour and kind of earthy on the nose with Galaxy hops imparting a subtle floral scent. Smooth mouth feel, herbaceous and a little nutty in the finish. Solid drop. Their flagship Pale Ale is scented with a hop forward nose with hints of fruit and pine that follow in to the flavour. Smooth texture, well balanced flavour that finishes with a slight crisp bitterness. Excellent beer. Their Saison pours a hazy straw hue and is packed with candied lemon, tart fruit esters, spice and a somewhat dusty funk. Again, another brilliant beer. The Little Bling is their mid strength session IPA that’s fruity, piney and ultra light on the palate. Insanely sessional. The Bling IPA is their slightly more ramped up version of the Little Bling, weighing in at 5.8% with double the hops and malts. Their Celtic Red was a “one off brew” that was malt forward, bready and choc full of caramel malts. Medium body, mild bitterness along with toffee and a sweet malty finish. Next up was the Robust Porter – dark, roasted, coffee notes with a delicate vanilla sweetness to balance. We finished on their version of a Marzen which was a hopped up number with a tonne of biscuity malts to balance. And what else to match your beer with other than a gourmet European style pizza? The kitchen pumps them out and after we tried one we knew exactly why. The small, thin crust pizzas are delicious and won’t leave you undoing your belt so there’s still room for a few more pints afterwards. Well we can say that we thoroughly enjoyed our Victorian brewery tour and to finish it off in style here at Bridge Road was the icing on the cake. A return to this fine establishment is a must!