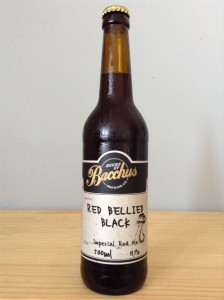 “Raise your glass to the light and this dark beer shows off its beautiful red underbelly. Intense tropical, piney aromas lead in to equally intense tropical flavours with hints of cranberry, honeydew, melon and ginger. Finishes with a subtle tartness derived from our secret spice ingredient. Beware its bite.”

Served in an IPA glass. The deep, rich mahogany pour is capped off by a finger of tightly held foam that gradually shrinks to a fine film that struggles to produce much lace.
Geez this is one complex and malty number we don’t know where to start. Obviously she’s sweet but in a artificial killer python (pardon the pun) kind of way. It’s gelatinous with candied sugars, tonnes of caramelized toffee and sugar syrup, raspberry coulis, strawberry jam, over-ripened rock melon, mango, hints of alcohol and even a trace of cinnamon. Ok….what the hell do we have here?!
In the mouth the texture is pretty chewy and plump in body. We’re gobsmacked at how well the booze (11.1% ABV) is buried among the rich flavours. A slow and steady quaffer here folks.
The flavour is also quite complex. Upfront we get a burst of over ripened fleshy fruits, slightly tart berries, chewy caramelized malts, toffee and a subtle alcohol warmth. Once it comes up to room temperature the alcohol does present a bit more as do the super sweet malts. The finish is potent and sharp with a focus on the rich and heavy residual sweetness and spice on the back end.
Far out that’s one seriously complex drop. Obviously not for everyone and mainly for the extremely adventurous craft beer drinker. Final thoughts are that it’s better consumed cold and share it with a friend. But more to the point, bask in its moreish complexity because it’s one seriously decadent ale. Kudos Bacchus!