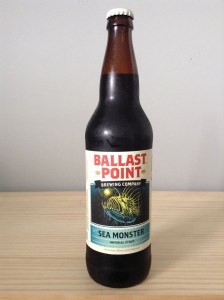 “A beast of an imperial stout.Our Sea Monster Imperial Stout explores the darkest reaches of the traditional oatmeal stout. This bold, rich brew first lures you in with roasted coffee notes, then grabs hold with hints of bittersweet chocolate and currant. Backed with a perfect hop balance, you’ll soon discover this is one monster of mythic proportions.”

After brilliant rates of this breweries ‘Big Eye’ and ‘Sculpin’ IPA’s we thought it was about time we found out how these master brewers fare in the dark beer department. What better way than with an imperial stout? Served in a beer tulip. The impenetrable black pour generates a dense, two finger tan head that kind of bubbles and pops like a frying pancake, eventually establishing a thick blanket on top with some healthy lace trails clinging to the glass. Well, it doesn’t take long to realise this is an American-style stout. The hop profile is intense. Those lovely roasted malt characters are coming through but a firm grassy hop aroma immediately cuts through to balance it out. Once it warms the darker characters really begin to shine though. Dark chocolate, licorice, black currant, ash, mild coffee, earth and a hint of dank cellar room creep in. Really starting to take shape now. In the mouth it’s incredibly bitter and the 65 IBU would be the culprit there. Quite smooth otherwise. The Co2 is mild-medium and the body is medium-full. Dry texture with a discernible alcohol warmth (10% ABV). The flavour profile is very similar to the aroma. A base of dark roasted malts, chocolate and earthy ash are charged up by a grassy hop bitterness that’s further complicated by a slightly stinging alcohol burn. As the initial flavours wane the ABV burn bridges the mid and descends in to a rich, dry, bitter and ultimately roasted finish. Some good legs are on show here. We’re a little undecided. Yes, it’s an American-style stout but we thought the hops were a tad too prominent. It’s still a very enjoyable drop nonetheless. We’ll stick to their IPA’s we thinks.