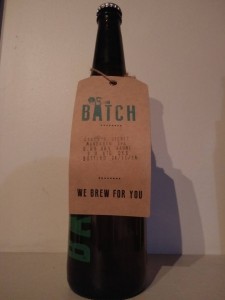 “Claus has never fully disclosed anything to anyone, so we had to follow him to find out. He left Germany with his Saaz and Mandarina Bavaria, and headed for NZ where he collected some Gladfield American Ale malts. Then on to Victoria for VIC Secret and Griffith for some Voyager Latrobe. Arriving at the brewery, he asked if he could brew a full-bodied IPA. We said sure, but what’s it going to taste like? He said ‘A nice malt number with citrus notes and of course, tangerines’. We asked why not mandarins given the hops to which he replied ‘just because it will taste like tangerines’. So we just left it at that, and had a sip. Man it tasted great….and a lot like tangerines!”

Served in an IPA glass. We’re met with a pale golden appearance that sports a frothy two finger head. It retains a healthy finger and a half that dispenses a smattering of lace as it ebbs. Initial scents on the olfactory lets it down. Mandarin tones come through but it’s held back. We get earthy malts, mild pine, citrus peel, rinds, a hint of ruby grapefruit and a kind of sweet and peppery basil accent. Mouthfeel is thin and watery..slips off the tongue. Enjoyable bitterness on the back end and the hops germinate a tad but the let down is the slippery texture with minimal carbonation giving a less than impressive palate. Much more of the same in flavour: dominated by this earthy malt note supported by a slight sweet citrus cutting through. The hop bitterness ignites around the mid as a herbaceous character rounds out a short and disappointing finish. Some lacing down the glass. Overall, we weren’t really fans of this beer. It’s weak and uninspiring and the flavours just don’t stack up. Yeah ok, that citrus flavour of tangerine.. It’s been a while since we’ve returned to a Batch beer and we now know why. Average!