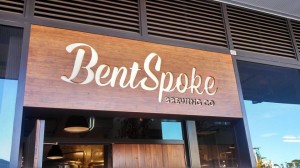 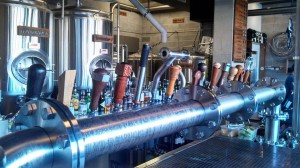 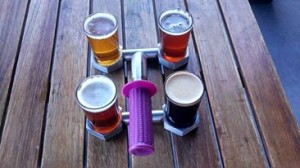 As far as must-visit breweries are concerned, Bentspoke brewing co. would have to rate in the if-you-don’t-visit-this-brewery-you’re-a-fool category. The other local brewery (the Wig & Pen) must be kicking themselves that they lost their award winning head brewer as he left to open up his own brewery in Braddon, ACT. We love a brewery with a good theme too, all 18 taps don tap handles that resemble different parts of a bicycle along with their tasting ‘paddles’ which really looks more like a part of an engine with a rubber bike handle to finish it off. Very cool. So after a good chat to the bloke behind the bar we kicked the arvo off with a tasting ‘paddle’ consisting of their version of a Tripel (Tour de Brugge) their cluster 8 (Imperial IPA) the cluster 12 (an Imperial Imperial IPA!!) and the grainy (Imperial stout) all which were brilliant, absolutely delicious beers. We then moved on to their PSI (saison) Sprocket (IPA), Crankshaft (IPA) and their seasonal porter which is poured straight through and transfused in the ‘hopus operandi’ which is packed full of fresh coffee and chili. All this drinking was making us hungry so we smashed down a couple of toothsome burgers which certainly hit the spot. After a good chat with Dan the man (manager) we were almost brought to tears when we were told the brewery only offers a few take-away’s from their huge range which must be in their growlers only. Let’s just say 5 of our empty, glass growlers weren’t graced with Bentspoke’s liquid gold. Other than this, it would have to rate as one of the best breweries we have ever been to. Friendly, helpful staff, cool theme, nice rustic place and most importantly, top quality beer. We can’t wait for our next trip to Canberra. Next time we’ll be buying some of their growlers though. Top shelf establishment.