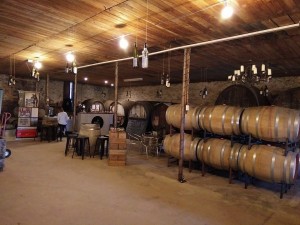 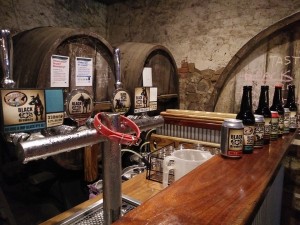 Any Aussie that says they’re not interested in the life and crimes of Ned Kelly is either lying or they’ve never heard of him. Driving the dirt roads and taking in the views of the mountains surrounding the Glenrowan region you can’t help but envisage Ned Kelly and his gang roaming around on horseback looking for an unfortunate household to ransack. North East Victoria isn’t only famous for the man in the tin helmet it’s also well known for its wineries, the King Valley wine region is home to a multitude of well known vineyards such as Brown Brothers, La Cantina and Gracebrook, but the one we were interested in lies about 20 kilometers east of Wangaratta in the rural village of Taminick where Black Dog Brewery and Taminick cellars is situated. The cellar door here is one that most craft beer fans would have never seen before. The century old solid brick building has multiple uses – the first we noticed is that it’s used as a barrel room, the thick walls act as an insulator and you immediately feel just how cool it is inside the second you walk in. If you’re planning on staying for a while and didn’t bring your jacket and beanie then you can relax in one of the little seating areas and sample the beers and wines as the pot belly fireplace warms you up. Down in the back corner is where you’ll find the bar and if you’re lucky you can even meet the head brewer, James, as he talks you through his beers, wines and the history of the family winery, of which he is very proud of. There’s only a small selection on tap (and be careful because for some reason the taps are only open on weekends) it consists of their collaboration with Eel River – the ‘Eeldog’ Imperial Black Rye Ale which is a brilliant drop, full of earthy malts, coffee and dark fruits with a hint of rye spice. The ‘Leader of the pack’ is a kind of 50/50 English to American style IPA with a hefty malt backing and a nice solid punch of piney and fruity hops. The Golden and Australian Pale Ale make up the last two but we are yet to try them. Don’t worry if you rock up on a Friday though (as we did) because his whole range is on offer in a mix of tinnies and bottles that are all themed with the family dog, Macca, a Kelpie cross Jack Russell that unfortunately passed away a year ago, so his legacy can always live on. You’ll have to be prepared for a bit of an off road adventure to get there though as it is quite rural, but this is why the formation of the high country brewery trail is such a blessing – it offers beer tours that makes stops at Black Dog along with other breweries such as Bridge Road and Bright Brewery so a designated driver is not required. So pull out the diary put in for a long weekend and get down here and check out some of these superb breweries and the gorgeous landscape this region has to offer.