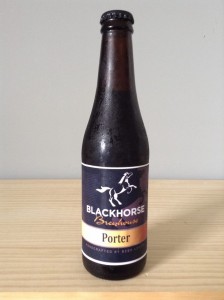 It’s been a while since we’ve reviewed a Black horse beer. No excuses for that really as they are literally just up the road from one of us! Since our last review though, some changes have been happening. The most noteworthy is the appointment of a new head brewer, Gerard Meares (formerly of Pinchgut brewery). The result of this is a beer that has caught our eye. Seeing as he is quite the seasoned purveyor of dark beer, this new Porter has us interested and we’re ready to pop the cap and get drinking.

Served in a snifter glass. The cola-coloured pour manages to arouse a finger of beige foam that steadily deconstructs, eventually establishing a light filmy overlay with minimal lace trailing it. The nose is essentially roasted and dark with a good amount of chocolate and malt emphasizing it. We detect a certain licorice-like scent but but there’s this slightly tangy funkiness to it that has us interested. It’s a little complex as it presents a certain fruity acidity but actually comes off as sweet, almost like sour cherry or underripe berries. It’s quite nice and we actually like it. The mouth feel is quite smooth with mild carbonation. A somewhat soapy texture coats the palate with the 5.8% ABV nicely buried amongst it. Quite tangy upfront, almost cloying in its borderline sourness. A somewhat musty dryness is formed off the back of it, carrying forward through the mid and picking up a mildly assertive bitterness with it. This Porter finishes dry and slightly salty with a pinch of roasted malt and chocolate to finish. We’d be lying if we didn’t say we weren’t all that keen on the tangy character. Other than that it’s a decent Porter.