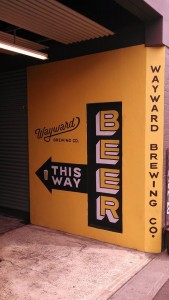 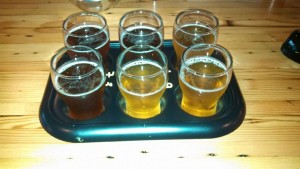 Just 5 kilometres west of the Sydney CBD sits this busy little inner-city suburb. Annandale has a rich history and beer is right at the heart of it. From Parramatta road it’s a turn off on to Pyrmont Bridge Road where you’ll pass the historic Malt Shovel Brewery. From there it’s a quick left turn in to Chester street then another into Gehrig Lane, where at this point you flick your cabbie some cash and prime your taste buds for some liquid ecstasy. Initially it was our olfactory’s that were tantalized as we passed the BBQ set up at the entry to the brewery. It was hard not to stop for a quick sausage sanga but our palates were screaming for beer so the bar was our first stop. A decent selection was on offer, ranging from a few light ales to a delicious ESB, an oatmeal IPA, a Marzen, a lavender infused Kolsch and their famed ‘Charmer’ Red IPA. Before this visit the Red IPA was our favourite beer but the oatmeal IPA would have to take down best beer of the afternoon. The biggest surprise came from the ‘Furious Gnome’ ESB, which was absolutely delicious! Earthy and spicy but with a lovely hint of chocolate and coffee laced through. Full credit to the brewer(s) as every beer we got through was clear as day, sessional and highly palatable. Cool little set up, good atmosphere, friendly and well informed staff and above all tasty craft beer! A great afternoon was had by all. If you’re in the hood we definitely urge you to drop in and try a sampler. You won’t be disappointed.