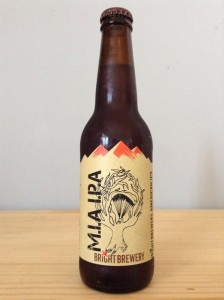 “Aptly named M.I.A. because when the first batch was due to be kegged, our then brewer (Jon) went paragliding at lunchtime and didn’t come back.  It turned out he had to make a forced landing on Mt Feathertop and didn’t get back until late into the night.”

Served in an IPA glass. This beer pours a cloudy, deep amber with orange highlights. The one finger head is thick and frothy and retains quite well as it adorns a sheet of lace down the walls of the glass.
What we get is a hop-forward, tropical and super sweet aroma that’s literally erupting out of the glass. Mango, lychee, rockmelon, paw paw and guava are just some of the fruits that make it up. There’s also a fair bit of sweetness being added by the caramel malts too, handing it a toffee/butterscotch complexity that marries up with the hops brilliantly. Very nice.
The mouth feel is plump and chewy with a decent weight on the tongue. The 70 IBU develops quite late but is still kept well contained. Bit of a mild alcohol warmth (7% ABV) in the middle but that’s it.
We were hoping the flavour continued on from the aroma and it does. It follows on with sweet and fleshy fruits like mango, rockmelon and paw paw as well as that sugary caramel malt base tucked in right behind. The delicate booze burn cuts through the mid palate and ushers in the ascending hop bitterness as it finishes with a sweet, dry and surprisingly spicy note that endures well on the rear.
Well there’s nothing MIA in character that’s for sure. Although it flirts with being a bit cloying at times the overall balance is good which makes this a pretty darn fine IPA. Another solid entry to Bright’s very respectable range.