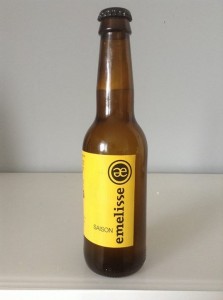 Brilliant brewery from the Netherlands here. These guys offer a massive range of beers such as the double IPA and their incredible Russian imperial stout, but none can top the brilliance of their signature creme brulee stout. For us, one of the best stouts we’ve ever had the pleasure of drinking. This saison was a bit of a random pick but as we mentioned before, these brewers can certainly brew a good beer. So here goes.

Served in to a beer tulip. The slightly hazy honey appearance is capped off by a fluffy two finger head that reduces somewhat and holds at a good 0.5 cm. Decent head retention, allowing for some thick, wavy lace trails to be released. The aroma is a little delicate but we do pick up faint wafts of grains, wheat, peach, citrus and a touch of tangy orange sherbert. When we really get our noses in deep and inhale a certain yeast complexity is offering a kind of Belgian blond/tripel-like peppery spice with a light herbal note. Nice aromas but it’s just lacking a little in depth and vigor. The mouth feel is nice and light on with a slightly prickly texture. A bit of dryness to the tongue too, the IBU only sits at a mild 45 but an assertive bitterness is definitely felt. On the palate we get the same gentle approach as we got with the aroma. A nice little fusion of peppery spice, grains and grapefruit are followed by a mild bitterness through the mid. Maybe a touch of funky sourness forming late as it finishes dry and bitter. Not the best saison we’ve ever had and certainly no where near their best brew. Although, factor in the low ABV of 4.6%, the light body and fruity, bitter flavour and it’s one that could easily be sessioned on. Hey, isn’t that what saisons were originally brewed for anyway? Either way, a bit tame for us, we’ll be looking forward to the next installment from Emelisse.