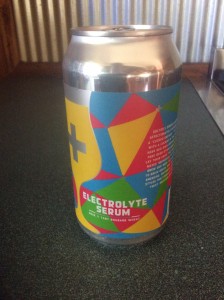 “In 2010 Doctors orders commercially re-birthed the Gose beer style in Australia. Over the years we’ve been playing around and this version has been the most exclusive and highly acclaimed. This tart German wheat beer includes coriander, salt and rhubarb.”

Poured into a shaker glass we see a slightly hazy straw/hay like colour with plenty of small carbonation. A massive velvety white 25mm head thick like a cloud that retains beautifully like a German beer. Plenty of solid lacing clinging to the glass. Aromas out of the can are wheat malts, bready sourdough, vegetable hops, grass/hay, lemon. First sip is a stronger version of the aroma. A good swish around the mouth gives that tart hit on the palate which subsides fairly quickly. More flavours of lemon tang, light coriander, sourdough yeast, german wheats, and that salt like flavour that lingers on the back palate..imagine you have been in the ocean and that flavour of sea salt that makes you want to skull water. Carbonation is low and the body is low also allowing a decent swig of brew each time. We note the Alc vol here of 4% and this backs up with each sip. It’s very drinkable. Smooth and washes down effortlessly. We have to admit though, we are struggling to sample the rhubarb. We don’t get a heck of sweetness. We were expecting that earthy richness that rhubarb elicits when cooked but maybe the vegetable like flavour is the rhubarb. Either way it’s a nice smooth smashable drop. We love the name as its apt. You can imagine drinking this and thinking it’s good for you. This with Mexican would be a treat.