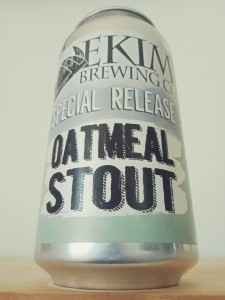 “We are a small craft brewing company based in Sydney. All Ekim beers are unfiltered & unpasteurised; made in small batches with only malt, hops, yeast, water & a rebellion against mass produced brews.”

Appearance: As expected…impenetrable black with a short brown cap forming on top. It reduced to a halo which clings to the glass as it subsides.

Aroma: Beautifully rich and complex. The porridge-like oats come to the fore supported by mild roasted coffee, cocoa, dark chocolate, fresh vanilla bean, earthy spice, dark fruits and truffle. As it warms it develops this sharp molasses and or Vegemite quality which shows off the depth on offer here. Excellent aroma.

Flavour: It’s a little slow off the mark…we get a hint of metal initially but once it hits its stride we get that delicious roast, coffee, lightly charred malts, cocoa, dark chocolate and subtle vanilla. Maybe a touch of smoke/peat seeping through late in the piece. Oatmeal and porridge also making a late entrance as it finishes slightly dry, roasty and bitter sweet.

Mouthfeel: Metallic yet fairly soft and rounded. Much lighter than your average 6.8% stout.

Overall: This little microbrewery in northwest Sydney has a knack for brewing super clean and on point beers and this one is no exception! One of Sydney’s most underrated brewers in our opinion. Classy stuff.