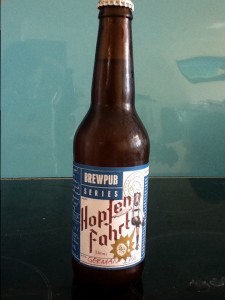 “Recent times has seen the traditional hop growing regions of Germany endeavouring to breed flamboyant and expressive aroma and flavour hops to rival the varieties offered by the new world US, New Zealand and Australia growers. We thought it was about time to see what these new German hops were about and have sourced the high oil varieties of Polaris, Mandarina, Bavaria, Saphire and Herkules. This German IPA has come out bursting with fresh stone fruit, mandarin and grassy aromas. The flavour is choc full of spicy resinous hops, and is rounded out by a solid whack of bitterness.”

From the impressive feral brewery in W.A, this IPA is from the brewpub series. We love the tweaking that the craft brewing process undergoes, and this ‘German IPA’ showcases Polaris, mandarina, saphir, and Herkules hops from Germany. With lovely reckmelon, mild grassy/piney notes on the nose, we see a golden, slightly cloudy body…very different to the copper hues of most IPAs. The head leaves minimal lacing on the glass. Mouth feel has good carbonation, and there is a spicy yet drying effect of the hops on the palate. Bitterness definitely present. This brew sits at 6.5% and you can certainly taste the booze component…either that or it’s from the style of hop used from Deutschland. We havn’t seen many of these hops so it’s great to add to the memory bank. Overall,  an interesting IPA. We love the beers from this brewery so we will look out for more brewpub series.