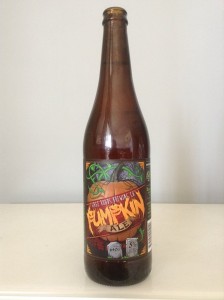 We aren’t really huge fans of pumpkin ales but we thought we’d give this one a crack as most Gage roads beers are quite good.

Served in a shaker glass the slightly hazy golden pour produced a one and a half finger white head that swells but quickly collapses to a collar. Minimal lacing is being shown. Along with the obvious wafts of pumpkin the aroma also packs a bit of a spicy zing with hints of nutmeg, ginger, clove, cinnamon sugar and orange peel coming through. Mild-medium carbonation with a slightly thin, watery mouth feel. We were kind of hoping for a thicker, more creamy feel but it’s quite light on and slippery. The flavours pretty much mirror the aroma without much body. Pumpkin, spice, orange and some sweet malt is what we could detect. Only 5% ABV so it should be pretty sessional but it isn’t. Too one dimensional. This is why we don’t like pumpkin ales…to sum up it was a pretty average beer.