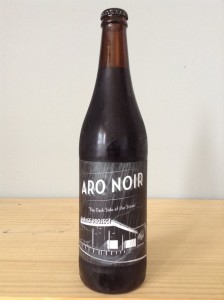 “Aro Noir is a pitch black and full flavoured stout. At its heart is a blend of four malts, with Columbus and Summit hops, creating a citric bitterness and aroma that marries nicely with the roast malt character. Yes, it is inspired by the darkness of a Wellington winter in Aro Valley, but truly it is a stout for all seasons. Join us on the dark side.”

Served in a snifter glass. Mat black appearance with a gushing four finger head that steadily recedes and settles to a fine film on top. Scarce lacing considering the monstrous head that’s generated. On the nose it’s light and only moderately roasted. We’re certainly getting chocolate, coffee and those rich, malty notes but the use of Columbus and Summit hops provide a hefty fruit sweetness that almost hints at a black IPA at times. Adding to the sweetness, albeit a darker one, are suggestions of molasses and very subtle apricot. Not heavy enough for us plus it all seems a little muddled and over complicated. Can’t say we’re fans of it so far. In the mouth it’s highly carbonated, slightly metallic, lean in texture and mild-medium in body. Maybe a touch of bitterness in there but it’s far from what we were hoping for. The flavour has the same issue as the aroma. Upfront we get soft chocolate and roasted malt notes that become lost in the fruity flavours that are provided by the generous use of hops in this brew. A pleasant bitterness transitions through the mid and delivers a dry, hoppy finish with restrained roasted notes in the tail. On the upside she does improve on the rear palate as a lovely roasted note appears. We really don’t like being critical of good breweries but mostly everything we’ve tried from Garage Project lately has been average. This particular stout is too generously hopped, not enough bottom end and is way too light on for a stout. We’ve had some real cracking beers from these lads in the past so we’ll hold out (and keep trying) until we find something better!