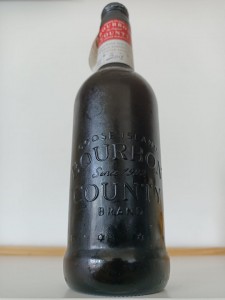 “Working with our friends at Intelligentsia, we flew down to Guatemala to source some of the world’s best coffee to use as we release the first-ever Coffee Barleywine. The beer is an English-style Barleywine, meaning malt forward, and aged in 4+ year old Heaven Hill Bourbon barrels before adding La Soledad coffee beans right before packaging to retain a bold coffee aroma and flavour.”

Appearance: A real muddy brown kind of affair. It forms a wispy head which vanishes instantly. No lacing whatsoever…as expected.

Flavour: Like dropping a sweet malt bomb on the palate it explodes with rich and syrupy caramel and toffee fudge, burnt chocolate, brown sugar and molasses. The coffee gets involved nicely as does the bourbon barrels with its damp musty oak. She warms up nicely on the back end…showing a bit of that 15% ABV but also displaying toasted coconut, raisin/dates, burnt brown sugar and peated whisky.

Mouthfeel: Vigorous but no where near as full on as we were expecting (especially considering its size). Chewy as hell but at the same time smooth and luxurious.

Overall: We shouldn’t be surprised by the quality these guys have mastered the art of barrel aging extremely strong beers since way back when. We have to give special mention to the addition of coffee too…just enough to know it’s there without overdoing it. Absolutely flawless