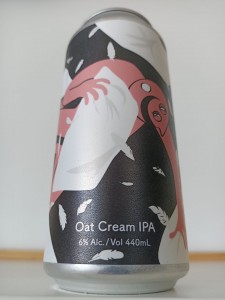 “Like getting hit in the face with fluffy pillows of hoppy fruity goodness. A hazy IPA base with a double dry-hop treatment using El Dorado, Galaxy and Amarillo. From there we layer in lactose to build further body and sweetness, and grapefruit to lift the fruit character to another dimension!”

Appearance: Super hazy dark pastel yellow with a short and impatient head atop. What little bubble is left settles at the rim with little lace to show.

Aroma: Soft creamy citrus, pink grapefruit and nectar are hitting the olfactory’s initially. The latter playing in to that frosty fruit character nicely. Sweet and sticky tropical fruits like mango and pineapple, further lactose and or vanilla sweetness along with very delicate hints of aniseed and tea. Quite unconventional and we’re digging it.

Flavour: Pretty similar to the nose but with a bit more emphasis on the tangy citrus and nectar with a line of grapefruit acidity underpinning it. If there were such a thing as grapefruit flavoured frosty fruits that’s what the mid palate would be all about as it finishes on a rather smooth, creamy and citrusy note.

Mouthfeel: Sleek and pretty damn creamy. There’s a really gentle bitterness while the 6% ABV is nicely tucked away.

Overall: This is our first entry for Tallboy & Moose and we must say we’re pretty impressed. The creamy texture and juiced up aroma and flavour is dialled in. The depth and overall balance also deserves a mention. Solid drop.