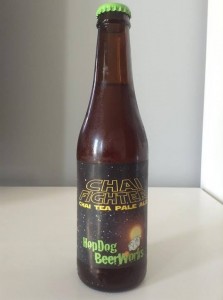 Well it seems we may have a slight crush on this brewery. With such quality beer coming out of such a small micro-brewery, one can not love what’s on offer.

Served in a shaker glass the golden amber pour produced a small white head that collapsed instantly leaving no lacing whatsoever. A lot of floaties but they don’t settle so we’re thinking it must be the actual chai spices that we’re seeing. And don’t those spices shine in the aroma. Wow. Big wafts of cinnamon, star anise, nutmeg, cardamom, aniseed and white pepper are just to name a few. Underneath the arsenal of spices is another spice that actually balances the others out. Vanilla. And it’s used beautifully. Gorgeous aroma. The mouth feel is slightly watery with low carbonation. Such a stark difference between flavour and aroma here. All the spices coupled with a funky Belgian style yeast are here but it drinks like it’s flat. Whether it’s due to lack of priming sugar or maybe being bottled too early. Maybe this is what the brewer was after we’re not sure, but we’re not too keen on almost flat beer. Real shame because this beer looked promising. 5.2% ABV is bang on. Oh well, more than keen to try it again. Keep posted.