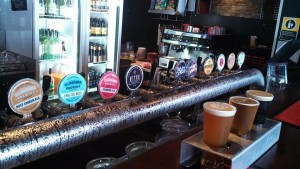 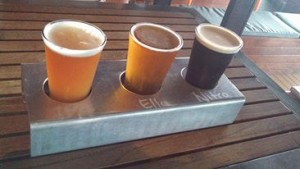 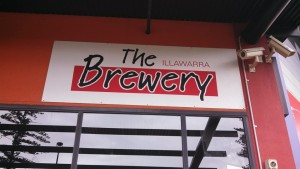 As far as locations go, Illawarra Brewing Company would have to be one of the best situated brewpubs on the East Coast. Roughly a 2 hour drive south of Sydney will land you in the city of Wollongong. From the center of town it’s a short walk (or drive) down Crown Street towards the beach using WIN stadium as your guide. Set literally a few steps from the beach, on cooler days the large glass windows allow you to sit inside and see straight out while on warmer days, sit out on the large deck while you take in magnificent views of the beach and ocean. It’s all well and good having stunning views but it all comes down to the beer and our first look at the taps instilled us with confidence. Two sets of 11 taps spoiled us for choice initially but a quick skim over them showed a few ciders with some guest taps from the likes of Hop Dog, Australian Beer Co & Blue Moon. Our first paddle included their single Ella hop golden ale, the Mo & Co IPA and the nitro milk stout (which was bloody delicious!). Next round was made up of the single Chinook hop golden ale, amber ale and the pumpkin ale. Other beers including an English mild, summer ale, witbier, lambic and a pilsner were on tap but after six samplers we only had eyes for the IPA and the milk stout which we finished the afternoon off with a few pints of. Overall it was a good arvo. Even though the selection was massive there was really only two that stood out (being the IPA and milk stout obviously). The bloke behind the bar didn’t seem to know a lot about their beer and the main thing that killed us…no growler fills!! Although just down the road you can fill em up at their off site brewery. But don’t expect to fill them up on Saturday as they’re closed, for some reason. Amazing location, good beer but a little rough around the edges. Still, a great place to enjoy a few crafties.