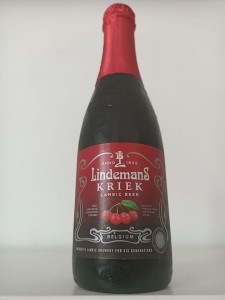 “Beer of spontaneous fermentation. Lindemans Kriek is made from one-year-old oak-aged lambic and pure cherry juice. Red, slightly cloudy colour. Deliciously fruity with the fresh flavour of freshly picked sour cherries. Its sharp and full-bodied flavour gives way to a perfect balance between sweet and sour.”

Appearance: Tis a gorgeous beer to look at…ruby red with a deep pink head which swells to a finger before slowly forming a collar. Laced well as we go.

Aroma: Definitely not what we were expecting! It’s very artificial with its dominant cherry sherbet and Dr Pepper-like sugary sweetness. It has hints of cola syrup at times as well. Picking up a slight musty-ness which is interesting as it’s not barrel aged. Kind of earthy deep down, minimal funk with just the slightest hint of aniseed. Weird. Don’t know if we’re digging it or not yet.

Flavour: Detecting a bit more tart cherry but still not getting much true and natural flavour of the fruit though. Again this Dr Pepper-like cherry cola thing happening is so unexpected and something we’ve never tasted in a Kriek before. It really doesn’t deviate a whole lot as it pretty much finishes how it starts.

Overall: We don’t pretend to be Kriek guru’s but we’re pretty sure this isn’t your traditional representation of the style. Which is strange coming from such an esteemed and well established brewery. Tell ya what though it would go well on a stinking hot day but happy to give it a miss until that happens though.