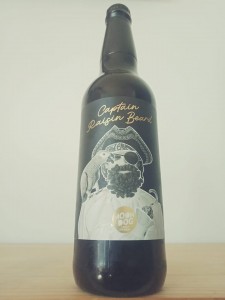 “Captain Raisin Beard and his motley crew of brewers ventured to the Caribbean to collect very special small batch rum barrels. These rum barrels survived the high seas and landed safely at the Port of Abbotsford where this Rum ‘n’ Raisin Imperial Stout has sat aging. This Imperial Stout is Raisin’ the bar on barrel aged greatness and this dark confectioner’s dream is full of the rum booty!”

Appearance: Impenetrable black with a billowing three finger tan head. It’s loose and rocky but it persists and works an excellent lacing down the glass.

Flavour: Showing a bit more aggression as opposed to the aroma. The booze burn, charred malts and bitter coffee come on hard but mellow in to those delicious Caribbean rum flavours, vanilla, chocolate, treacle, burnt brown sugar and dark caramelised fruits. Touches of woody oak and charred malt through to the drawn out finish.

Mouthfeel: Thick and viscous…some real density to it. Low co2 and high AbV – 12.9% which understandably has presence.

Overall: It has been a long time since we’ve been this impressed by a Moon Dog beer. We’re confident in saying its the best we’ve ever had from them…alongside the 2015 edition of JTS of course! All it needs is a few years in the cellar and this will really come in to its own. World class.