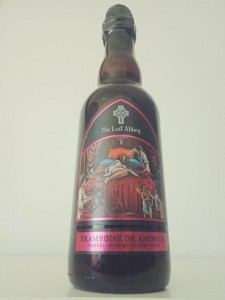 “Framboise de Amorosa is our first foray into the world of raspberry beers. It begins as Lost and Found ale and is sent into freshly emptied red wine barrels. The beer spends over a year in the wood during which time it is spiked with three additions of raspberries.”

Appearance: Kind of a muddy light brown affair with a wispy off white head. It slowly peels off but enough hangs around to leave a healthy lace on the glass.

Aroma: The raspberries really shine through. On one hand we get the tart fresh version and on the other we get the vinous red wine version. The latter also leads us in to the musty French oak very nicely. There’s certainly a lacto sourness but most of it is coming from the natural tartness of the fruit. Undertones of red peppers, glazed cherry and pink lady apples for extra enjoyment!

Flavour: Insanely sour. It took us a few sips but it does mellow out once the palate becomes accustomed to it. Then those luscious raspberries come through…again, fresh at first then morphing in to the more jammy and vinous raspberry synonymous with a good Pinot Noir. Lovely expressions of French oak with its subtle vanilla and musty accents rolling in to a sweet and sour fruity finish.

Overall: This is actually the first sour we’ve tried from Lost Abbey. And we’re very impressed!