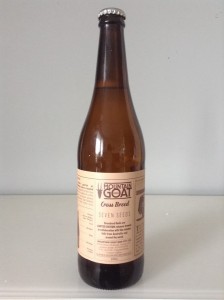 “Porter is one of the oldest of all beer styles. In this modern day interpretation, it is an almost black, chocolatey brew that pairs perfectly with roasted coffee characteristics. This smooth blend makes for a well-rounded, luxuriously rich winter warmer. The coffee guru’s at Seven Seeds have roasted these beans especially for this Cross Breed brew. We added the coffee after a cold extraction process once fermentation had finished, giving it a fresh coffee twist.”

It’s been a long time between reviews for us and Mountain Goat. Even though there has been some crackers such as the Rye IPA and the award winning Barleywine, not much else has caught our eye. Until this. Similar to the Rare Breed series the Cross Breed beers focus on collaborations with, not only big brewers such as Brooklyn Brewery, but other masters of their trade. For this release they team up with Seven Seeds – a local coffee shop – to deliver this interest-arousing porter. On we roll. Served in a beer tulip. The opaque black pour generates a finger and a half of bubbly tanned foam which hastily reduces to a collar with fine, streaky lacing being released. The nose displays that divine roastiness from the espresso really well. Wafts of dark chocolate, roasted malt, hazelnut, cocoa and a faint hint of jaffa are here to back it up. It’s kind of reminding us of a mocha. Decent. In the mouth it’s a touch too thin with a slick, oily texture. Co2 is expectedly low. What has been done quite well is the masking of the 6.2% ABV. Untraceable in aroma and flavour. After the decadent aroma, we were hopeful for a big, roasty and chocolatey palate but it was all a little watered down. The flavours are definitely there though. Upfront we get delicate coffee, chocolate and malts which carry through the mid nicely. A touch of sweetness develops, maybe a little lactosey with a hint of creamy vanilla that lead on to a well balanced finish. A lovely blend of vanilla and coffee round out this brew. Look, it’s not a bad porter, it’s actually very well balanced and drinks super smoothly. It’s just lacking that intensity in flavour it needed to really hammer it home. All in all it wasn’t bad.