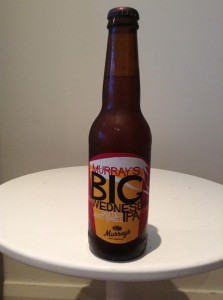 If you are a fellow craft beer lover like us then get to know the name ‘Murray’s’. For us, this is one of the best brewers in Australia. This IPA-even though Australian- is packed full of NZ hops which the head brewer loves to use in almost all of his brews. Served in an IPA glass the transparent golden/amber pour produces a bubbly 1 finger crown that eventually collapses to a thin film on top. Laced well despite the lack of head. Very herbal on the nose as the damp and vinous Kiwi hops come forward. Quite a firm sugary sweetness in here too which is nicely offset by a mild peppery spice. Definitely fruity, hints of peach and pineapple but it plays a minor role in the scheme of things. Different, but nice. The mouth feel is pretty damn smooth, it’s obvious now that this is brewed as a session IPA. There is a vibrant fizz as the moderately weighted body doesn’t grip too tightly on the way down, making for easy consumption. There is a solid herbaceous fore-flavour that lends a touch of pine and light florals before a peppery spice adds a little kick through the mid palate. There is certainly a little alcohol warming (6.1%) that accentuates the spice as the vinous, herbal hops make a triumphant return to finish it all off. Pretty decent length here, a mild dryness has definitely bunkered down on the tongue. Solid IPA…..and considering this is a session IPA you can’t ask for much more. A little light on for the adventurous craft beer lover but an all round approachable beer.