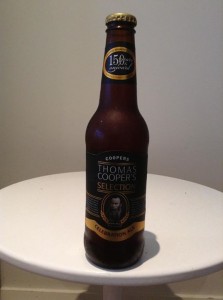 “Thomas Cooper brewed his first batch of beer on the 13th of May, 1862. Subsequent generations of Coopers have applied themselves to the pursuit of brewing excellence or the endorsement of our great beers to an appreciative public. This ale has been crafted to celebrate this passion for beer and brewing”.

We mention in our mission statement that we normally don’t bother with commercial breweries such as this but we thought this one was an exception. We love to delve into the history of Belgian, and many other ancient European breweries, but we seldom have these types here in Australia. So when we have the chance to celebrate the rich history of an Australian brewery we jump at it. Served in a shaker glass. The slightly hazy amber appearance displays very fine suspended sediment that refuses to settle. Good carbonation, a few streams trickle upwards to form this modest one finger head which steadily reduced to a light film over the top. Laced poorly though. If you have ever had the Coopers pale ale, well there’s not much difference here on the nose unfortunately. Big emphasis on grainy malts and pot pourri while a muted citrusy hop character tries to push through. Soft fruit esters do appear, as the bottle states, albeit very mildly…a somewhat fleshy pear aroma can be uncovered. Average. Feels pretty good in the mouth, well weighted with a nice slick texture. It has smooth carbonation with a light tingle from the hops as well. The flavour profile does tend to follow on from the aroma with a firm malt presence on entry. Quite earthy as opposed to the grains and florals on the nose. A restrained bitterness pairs up with a very delicate fruity hop character through the mid, leading to the dry, crisp finish. Painfully standard. We’re trying to like it but it’s just too timid and lagery. We can respect that the brewers are trying to keep it traditional, and points for that, but it’s simply lacking excitement. No real flavour other than hops and malts. Great history, not so great beer.