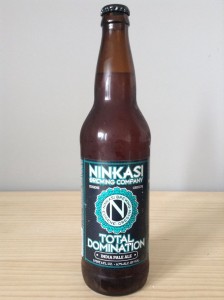 “Multiple hops collide in balanced perfection, dominating the senses and achieving total satisfaction. From the Pacific Northwest, birthplace of the modern”

Served in an IPA glass. The quite heavily clouded orange appearance knocks up a modest finger and a half of fizzy foam that swiftly reduces to a film with a thick halo around the circumference of the glass. We’re seeing some healthy lace trails despite the diminishing head though. The aroma is interesting. We’re unsure at the moment whether the American are trying to break away from the unprecedented success they’ve had with hops like Citra, Cascade, Centennial and Chinook and trying to experiment with new hops such as the ones used in this IPA ( Summit, Amarillo and Crystal). This aroma is no where near as fruity as we were expecting. Some tropical fruit notes do come through but we mainly pick up vinous scents eucalyptus, dank pine resins, lavender, herbs, a hint of citrus and a sweet honey-like maltiness to fill it out. We can respect the idea of trying to trail blaze but this aroma just isn’t cutting the mustard. The texture in the mouth is dry and slightly sharp from the 6.7% ABV. The carbonation levels are moderate and the body is around the medium mark. The palate isn’t too dissimilar from the aroma. We detect plenty of floral hop notes like lavender, pine resins and eucalyptus upfront. Only a mildly assertive hop bitterness (65 IBU) is felt as it kind of peters out midway. A hint of tangy citrus pops up before a long, bitter finish rounds it out. You won’t hear us bagging many American IPA’s from well respected American breweries but this one is average. As we said before we’re all for supporting the trial of new and exciting ingredients but this one wasn’t up to scratch. Here’s to hoping the Tricerahops is a bit more exciting than this.