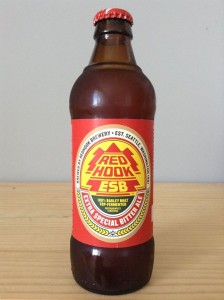 “Redhook’s flagship beer got its start as a winter seasonal recipe in the mid 80’s. In the early years, Extra Special Bitter earned a reputation as ‘banana beer’ and has been brewed continuously since 1987. ESB’s caramel malt sweetness and subtle spice and fruit hop flavors, quickly defined the style, becoming Seattle’s definitive craft beer and inspiring a new wave of craft beers across the country.”

Served in an English pint. The honey complexion is capped off by a loosely held finger of foam that rapidly diminishes to an island of micro-bubble. As to be expected there’s no lacing in sight. We get a bold, lifted caramel scent on the nose initially. Lots of honey, lots of toffee, bready/doughy malts, earthy hops and maybe some light florals running through as well. All pretty commonplace aromas for an ESB. We get the feeling the brewers are going for a more traditional ESB here, in that case we can’t really fault the aroma. Pretty safe but it hits its mark well. In the mouth it’s super smooth and silky in texture. The 28 IBU offers very little in bitterness while the 5.8% ABV is nicely contained. Mild-medium in body. Not a great deal happening but it would be a go to session beer if you love knocking back numerous malt forward bevvies. The flavour is like a mirror image of the aroma – big on caramel sweetness, honeyed malts, toffee and toast. We do detect hints of floral hops laced through along with buttery biscuits and a faint nutty character in the finish. She has a nice lingering dryness on the back palate too. It’s a bit of a strange one. Every time we’re about to say something negative it ends up being more of a positive. It kind of has that “oldy but a goldy” feel to it. Similar to how Coopers hold their respect among craft beer drinkers here in Australia, it would escape a lot of scrutiny in the States. Either way, it’s a decent traditional interpretation of an ESB that hits its mark on all fronts. Not bad.