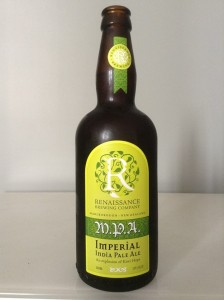 “Marlborough Pale Ale, or M.P.A. for short, is a uniquely kiwi take on an American Double India Pale Ale and is the biggest beer in our range.  It is also the most philanthropic as it contributes significantly to the national economies where it is sold due to its generous donations to the excise tax man! The style is based on the Americans intention to create a massively hopped full-bodied, higher alcohol Pale Ale to showcase the bitterness flavour and aroma of their locally grown hops. Rather than simply copying the Americans, Renaissance Brewing has taken the concept and turned it into a kiwi brew by utilising not only New Zealand grown hops but also by choosing to use only New Zealand hop varieties”.

Served in an IPA glass the gorgeous amber-copper hue constructs a two finger off-white head that retains and laces well. Quite a subtle nose, yet a multitude of slightly hidden aroma’s are there to be found. Pine resins, grapefruit, caramel malt, toffee and grassy hops are just a few we could pick up. In the mouth it’s full and well rounded with a slightly glutinous texture. Mild carbonation and medium-full body. There’s an explosion of bitter hops upfront that accentuate the bitter grapefruit notes. The booze is hidden in the aroma but present in flavour (8.5% ABV) as it shows up with hints of caramel malts and toffee in the mid-palate. Pine, zesty citrus and grapefruit return in the finish with good length. Such a well put together and perfectly balanced imperial IPA. Unbelievably sessional for an ale of this strength and super smooth for an imperial IPA. Brilliant drop.