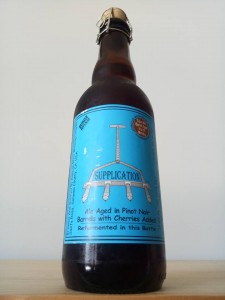 “Brown Ale aged in used Pinot Noir barrels from local Sonoma County wineries. It is aged for about 12 months with sour cherries, brettanomyces, lactobacillus, and pediococcus added to each barrel. Flavors from the cherries, Pinot Noir and oak balance each other nicely with a little funk from the brett.”

Appearance: It pours an attractive copper red with two fingers of loosely packed bubble sitting atop. It reduces to a film but still manages to decorate the glass on its way down.

Flavour: It comes on quite strong but like the aroma it balances out really well. Lots of vinous red wine upfront, cherries, raspberry and mild vinegar to follow. Some earthiness coming through, can’t quite put our finger on it. A bit of spice and musty oak developing late as it rounds out on a slightly dry and tannic finish.

Mouthfeel: Spritzy and relatively light. Sourness is sharp and acidic but nicely tempered by the oak. Medium-high co2.

Overall: Although we prefer Sanctification the complexity and depth in this has to be admired. We used to dislike sours but it’s ones like this that are making us eat our own words!