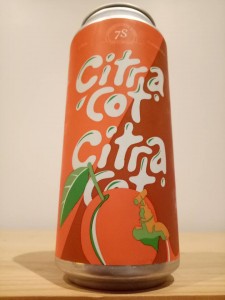 “When you live in San Francisco, it’s hard not to be aware of what Barebottle Brewing has going on.  For the past few years they’ve been cranking out some of the juiciest, haziest, and downright dankest IPA’s in town.  So when it came time for us to think about breweries to collaborate with for a juice bomb of an IPA, we didn’t have to look much further than right down the road. Our Citracot IPA collaboration ended up being almost a tropical cocktail IPA, in that the softness from the stone fruit flows with the juicy bitterness and citrus notes in a way that you can only really describe as “umbrella-worthy”.

Appearance: Relatively clear golden amber pour. Two fingers cap it off and retain pretty well. A good smattering of lace sticks to the glass as it ebbs.

Aroma: Tonnes of stonefruit. The apricot is front and centre but its flanked by an abundance of peach, passion fruit, orange blossom, rockmelon and overripe paw paw. It kind of has this pumpkin pie note to it which is really lovely. Definitely picking up a floral bouquet – not fresh though, a bit like cheap powdery perfume. Nicely done.

Flavour: A bit more raw. The apricot is still emphasized but it’s like biting in to a slightly unripened one freshly picked off the tree. Getting some earthy tones, kumquat, marmalade and orange peel as well. Not seeing much variation though, the same flavours carry in to the finish where a hint of tangy tangerine lingers on the close.

Mouthfeel: Smooth, creamy, minimal bitterness. The 7% ABV is tucked away rather nicely too. Co2 is good. Mild-medium body.

Overall: A little disappointing we must admit. Seven Stills and Bare Bottle collaborated to brew this beer but it’s interesting to know that Seven Stills went on to make a CitraCot whisky using a very similar recipe. Now that would make for an interesting boilermaker!