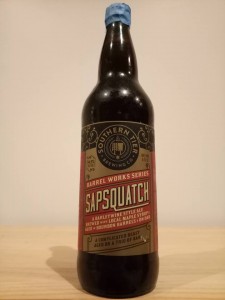 ”Introducing Sapsquatch, an elusive ale brewed with maple syrup. It spent 12 months “in the woods” developing strong character in three ways. One third of the beer was kept in bourbon barrels. Another third aged in bourbon barrels that once held maple syrup. The remaining liquid was aged on hand charred oak staves that spent time in Southern Tier Distilling Company’s American Whiskey. Sapsquatch is truly a complicated beast.”

Appearance: It pours a kind of garnet/light brown to cola with a wispy head that eventually vanishes. Not a skerrick of bubble remains on the surface.

Aroma: It reeks of booze, residual sugars, salted caramel, plum, maple (coming through more as it warms), port, dates, brown sugar and figs. A little bit of oak which gives rise to a hint of bourbon, vanilla and toasted coconut. It displays its American roots with just the slightest touch of resinous hops. Mild undertones of cherry, molasses, damp wood and charred oak. This thing just keeps on evolving!

Flavour: Follows on from the nose beautifully. It comes on with extreme sweetness but with a flutter of char to take the edge off it. The booze is sharp and showing through the bourbon oak…really developing mid way. Molasses, maple, treacle and a touch of plum which builds up to a sweet, sappy and warming finish that goes the distance.

Overall: This is one big and complex number. Lethal, rich and super sweet as well. Our only gripe would be that the maple and the oak don’t really present as well as they could have but really we’re just splitting hairs it’s a bloody fine offering!