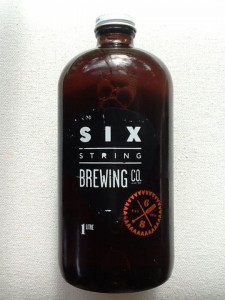 “As you might expect from a beer that’s a hybrid between American and Australian Pale Ales, this beer does its stock and trade on fruity and floral hop characters. But, really, in this day and age it seems you can’t go and release a Pale Ale without having it loaded with hops – you’ll be laughed out of the brewery. No chance here though; hops from the two countries give a heap of passionfruit, mango and citrus aromas. But it’s not all in the head. While the beer has been designed to have a clean and dry finish, over the top of the malt you get the hop characters coming through again. That helps add bitterness which contributes to a refreshing beer that doesn’t lack for flavour. The best way to sum up this beer? It’s just feels really good to drink.”

New microbrewery based on the central coast, NSW, this pale ale we had filled up at the brewery. Poured from our ‘squealer’ into a shaker glass the light copper appearance holds a 1 and a half finger white cap. Good head retention and lacing. There’s quite a mild pine-floral nose emanating with subtle tropical and stone fruits that powers over the subtle malts. Smooth mouth feel with medium carbonation. Quite light on, not a great deal happening in flavour, just the mellow fruity hops upfront with a malty mid-palate and a light citrus finish. A mildly assertive bitterness reminds us we’re drinking an APA. It’s a pale ale that most beer drinkers could enjoy, very sessional and at 4.8% ABV it’s not too strong either. Very drinkable.This brewery have just brought out this ale in cans. Do check out the funky little brew house/bar in Erina nsw, there’s a nice little range on tap.