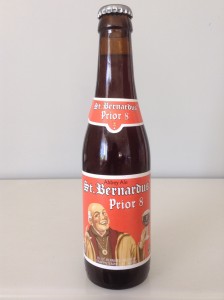 “St.Bernardus Prior 8 is a traditional abbey ale brewed in the classic “Dubbel” style of Belgium’s Best Abbey Ales. It has a ruby to purple color, smooth, creamy richness of texture that is almost oily, and a malt-fruit complexity reminiscent of coconut. (8% alc. vol.) It finds the perfect balance between sweet, bitter and malty tastes. One of the original recipes from the days of license-brewing for the Trappist monks of Westvleteren”.

Here we have another Belgian Abbey brewery with a nice piece of history to accompany it. The brewery dates back to the early 1930’s where the monks initially produced Abbey cheese, opting to eventually sell the cheese factory and begin brewing beer. Over the years they have brewed under a few different names – Trappist Westvleteran, St. Sixtus then finally on to St. Bernardus. Served in to a beer tulip. The deep brown/mahogany pour constructs a tightly held 2 finger head that shrinks to a firm layer over the top. Laced reasonably well. Some of the scents we are taking in are sweet, rich and viscous. It isn’t so much the depth of the aroma here but more the complexity and execution. We are in Dubbel heaven here as we bask in wafts of caramel, toffee, fig, plum, dates, nuts, brown sugar, butterscotch and banana bread. The olfactory’s are in overdrive right now. Simply put…brilliant. In the mouth it’s moderately weighted with a slightly chewy texture. Carbonation is expectedly mild, as is the bitterness. The palate is being treated to a fusion of different malts upfront with sweet and sugary tones of caramel, toffee and butterscotch taking the front seat. As it progresses the darker fruits such as plums, fig and dates creep in as a restrained alcohol warmth moves in through the mid. The back end sees a pronounced dark fruitiness as the finish almost resembles a good Pinot noir. Incredible complexity. This would have to be one of the best Dubbels we have ever tasted. So rich and moreish but so evenly balanced with sugary sweetness and dark fruits. All we need is a roaring fire and a char-grilled piece of eye fillet steak and we’d be complete. Excellent beer. It can’t get much better than this.