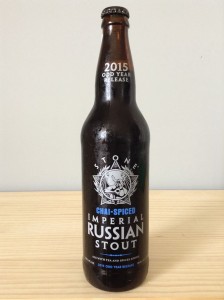 “This one-time-only beer, a fascinating addition to our “Odd Beers for Odd Years” series, incorporates cinnamon, cardamom, clove, ginger, a dash of black pepper and a dose of black tea to emulate the aroma and taste of authentic chai tea. Combine these strikingly piquant ingredients with the classic version of Stone Imperial Russian Stout―with its incumbent flavors of chocolate, black currants, coffee and roastiness―and an already profoundly rewarding beer ascends to new, flavorful dimensions.”

Served in a snifter glass. The impenetrable black pour whips up a healthy three finger tanned head that nonchalantly deconstructs and settles to a fine layer on top. We’re seeing some wet, streaky lace trails as we imbibe. A casual twirl of the glass conjures up aromas similar to a really spicy Indian dish. The depth of spice here is incredible actually. We detect tonnes of cumin, cardamon, turmeric, pepper, cinnamon, clove, fennel and ginger just to name over half a dozen! Not a great deal of hallmark stout characters other than a suggestion of roasted malts and dark chocolate. The spice literally drowns just about everything else out. In the mouth it’s sharp and slightly dry with the alcohol (10.6%) burn really accentuating the spice. A firm bitterness also cuts across the tongue and at 65 IBU we can understand why. The first sip of this beast is like an explosion of dozens of different spices vying for the attention of our taste buds. A plethora of spices such as star anise, clove, cumin, pepper, fennel, cardamon, ginger, cinnamon and maybe even a hint of coriander are almost too much to handle. Couple this with the slightly astringent burn of the alcohol and it’s a little bit too hard to enjoy. The only signs of an R.I.S are on the back palate where we finally get a hint of roast but even then it’s somewhat spoiled by a muddled infusion of spice. Way too much spice here. You won’t hear us knock Stone beers very often but this one is bloody ordinary. Spices have been heavily overused and it drowns out any other feature of this stout. We’re not fans at all.