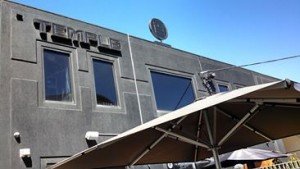 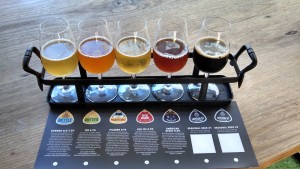 There wouldn’t be too many breweries that can lay claim to being at the point of closure then bouncing back to reopen the doors to a brand new renovated venue and an all new range. Temple unfortunately went in to voluntary liquidation then amazingly bought the operation back off the creditors, turned the place in to a smick new establishment and hired a new head brewer who can now boast a respectable and extremely tasty new range of craft beers. Now that’s what we call passion and perseverance. Kudos! We rocked up to the brewery on an absolute pearler of a day and were greeted by a friendly and very well informed host who knew his beer. Once we checked out the new haunt we dove straight in to one of their paddles, or should we say stylish (and probably quite expensive) cast iron glass holders with their own branded mini tulip glasses to boot. Their line of beers travel smoothly from light to dark and from lightest to strongest. The bicycle beer is their Summer ale – super light, fruity and extremely sessional. Next was their ‘anytime’ IPA which is aptly named as it would be drinkable any time between 12am-12pm. Their Pilsner was brilliant and true to style, a very enjoyable drop on this hot sunny day. Next up was their best seller, the ‘rye hard’ Rye IPA – big, hoppy and spicy and easily our favourite out of the five. To finish was the dark and mysterious American Stout which was delicious and easily slotted in as 2nd best beer of the afternoon. All up it was a very well put together range, each beer somewhat compliments the next. Well, it’s safe to say that even though this brewery has been through some hard times they have definitely come out the other end better off for it. Definitely a brewery we’d return to.