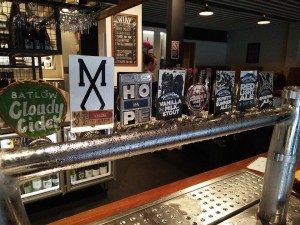 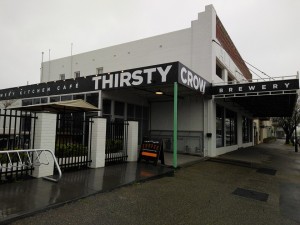 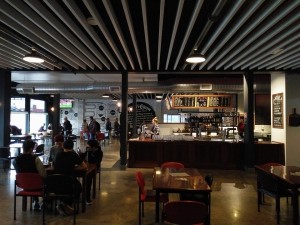 The city of Wagga Wagga can lay claim to many things. Being the largest inland city in Australia would be one of the main things that come to mind. It’s also one of Australia’s biggest food bowls. Just as important is the military training base of Kapooka which is five minutes drive out of the city and with a population edging close to 60’000, one would hope that a craft brewery had been established to keep the thirsty locals, the future defenders of our great nation and the farmers well hydrated with top quality tipple. Well it’s known as The Thirsty Crow and she’s situated in town, you’ll find it at their newly renovated address at 153 Fitzmaurice Street Wagga Wagga. The establishment itself is immaculately kept, the interior has a wide and spacious feel with polished concrete floors, mood setting down lights, a mix of bar tables, booths and cafe tables and chairs that surround the main bar that’s centrally positioned within the main beer hall. The new renovations also include a neat little back room that they’ve named the ‘brewer’s den’ where you can relax with a coffee or drink your beer alongside the tanks and square off with your mates over a game of ping pong on the semi professional table. The main bar presents two sets of seven tap systems that pour the brewer’s core range that consists of a Golden Ale which is cheap tasting, loaded with Aussie pale malts, Saaz hops and German yeast – it must be the substitute for the usual VB drinkers. Next up was their Red Ale which is a mid strength, malt forward drop which had a subtle hop aroma and a seriously smash-able palate. Pretty good for a 2.9% lightweight – certainly a viable option for the designated driver. We then moved on to the Summer Ale which was a light and crisp session ale that offered a lifted fruity hop aroma, a medium dry palate and punchy hops with a subtle pale malt backing. Solid drop. We finished on the brewers signature Vanilla Milk Stout – gorgeous sweet vanilla and roasted malt aroma. Slightly bitter with subtle coffee notes creeping through. Delicious drop, easily their best beer by a mile. If none of Thirsty Crow’s beers tickle your taste buds then an impressive selection of other Aussie craft beers from breweries such as Akasha, Batch and Hope Brewhouse should satisfy the palate. We did have one gripe though, we were keen to try their IPA but for reasons unknown they didn’t have it available. Although, need not worry all you future visitors to this fine establishment as there are big plans in the pipeline. Plans that will more than quadruple their annual output which only means more beer, more experimenting and more smiles on the punters faces. Big things are planned for this regional microbrewery. Keep an eye on it.