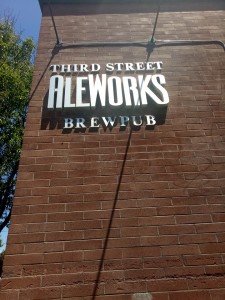 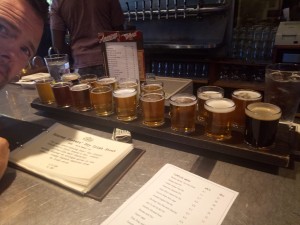 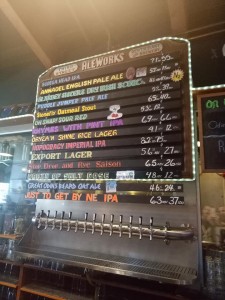 Our next stop was literally right in the heart of San Francisco’s wine country – Santa Rosa – a bustling little rural town known mostly for its wineries, breweries, lakes & parks and also the famous writer of the old cartoon ‘Peanuts’ Charles M. Schulz. But we were here for one thing (well maybe a couple of things) and that was to hit the local breweries! Third Street Aleworks was on the cards mainly because of its close proximity to another venue (we won’t mention it here but we think you know what we’re talking about).

The bar itself had a somewhat Irish/English pub feel to it with a cool little outdoor area and glass-back windows that give punters a view in to the actual brewery. It was surprisingly busy for a Tuesday arvo so we took a seat at the bar. The tap list was impressive but it was the size of the tasting flight that really took us aback as there’s enough space for 17 taster glasses but the brewery only offer 16 beers! “We’ll try every one of your beers thanks!”. But this is where it went down hill, there wasn’t really one beer that stood out, they were all a bit underwhelming and unbalanced. There were a few that were better than the others i.e the Annadel English Pale Ale, the Bodega IPA and the Stonefly Oatmeal Stout but other than that we were happy to move on!

Because just around the corner was what we were really here for!