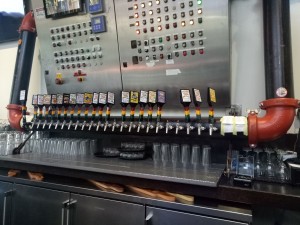 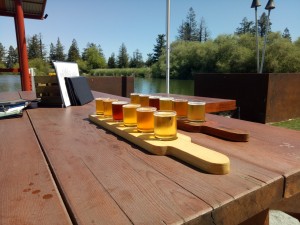 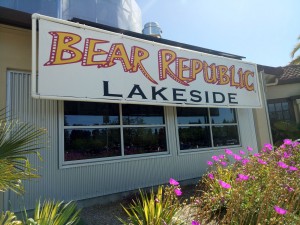 It all kicked off on a picturesque afternoon in the heart of Californian wine country. This is after a 6am alarm and battling Sydney’s peak hour traffic to catch a 13 hour direct flight to San Francisco. Once we landed (the day before we left!) we followed that up with a short(ish) drive north out of the city to the semi rural town of Novato. There we finally stood in front of the brewery, situated at the front of a golf course and locked in by a gorgeous little lake. The place is deceptively big with the tanks to the left, the bistro to the right and a kind of sports bar set up in the centre. After we paddled up (by the way they call them flights in America) that huge sun-drenched decking area outside was calling our names!

As to be expected the beer selection was incredible. We loaded up with the Double Aught Pilsner, Grand-Am APA, Racer 5 IPA, Hop Shovel IPA, Hop Rod Rye IPA, Juicy IPA, Racer 500 IPA, Initial Attack Belgian IPA, Fastback Racer IIPA & the Big Bear Black Stout. With all of these delicious IPA’s we were wondering if our first stop had set the bar too high (along with our BAC!).

Too bad we had to keep moving as we could have really got comfortable here. We hope the Novato locals know just how lucky they are having an institution like this nearby. What a way to kick off proceedings!