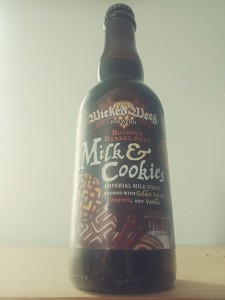 “Crafting the ultimate comfort beer was a winter challenge we happily embraced. Our Milk and Cookies Stout is a cold weather classic, and this version cranks up the comfort through barrel aging. We entrusted our Imperial Milk Sout with Golden raisins, cinnamon, and vanilla into the warming embrace of Kentucky Bourbon barrels to carry us home for the holidays. Relax. Drink up. You’re home.”
Glassware: Snifter.

Appearance: Dark brown/black with a 10mm dirty looking head that has plenty of fizz but recedes rather fast, leaving a tiny rim around the glass, made up of similar minute carbonation. Thin sets of rings left behind as it ebbs.

Aroma: The first thing that springs to mind is raisin toast! Just without the cholesterol building layer of melting butter on top. Big impressions of the bourbon barrels, cookie dough, Vegemite, Anzac biscuits, brown sugar, vanilla and booze. As it breathes a bit we detect the cinnamon spice, some chocolate alongside some lactose sweetness. Pretty lush. We can really get this Imperial Milk Stout that’s brewed with golden raisins, vanilla and cinnamon…hope to really detect golden raisin.

Flavour: We’ve recently found that the intensity of Wicked Weed’s big barrel aged pastry stouts have been lacking in flavour. This does not! This one follows on with the this delicious beer version of raisin toast. Booze heat which is not overbearing, moreish cookie dough, vanilla, Anzac biscuits, sweet cinnamon, roasted caramels and a biscuity cookie dough malt, milk chocolate, stewed fruit but it’s hard to detect golden raisins per se. The bourbon barrels really drive this bad boy all the way through to the finish.

Mouthfeel: Ridiculously smooth to taste. It’s 11.3% Alc volume! It’s hidden so well. Stickiness on the lips roughly half way through but not an overpowering sweetness. Minimal bitterness makes it so easy to keep gulping down. Full bodied with great length…namely that bourbon barrel heat. Carbonation minimal as expected.

Overall: Such a tasty stout. The highlights are the bourbon barrel aging that gives it a mustiness as well as the drinkability given its pretty hefty in alcohol volume. It’s rich, but not too sweet, nice use of the cinnamon…prominent but not overdone. Bloody delicious and hard to fault. Would love a tad more raisin but sheesh don’t want to be picky!