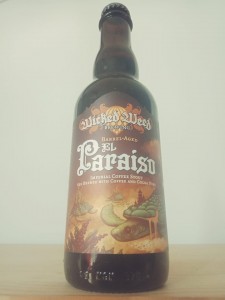 “For those who think paradise cannot be improved upon, we offer this liquid of extreme repose. Bourbon Barrel Aged El Paraiso is decadence encapsulated. Madagascaran vanilla layers with the bourbon barrel flavor in a flawless and intoxicating wave. Dark cocoa nibs and obsidian coffee lend a roasted indulgence fit for an island king. Transform your paradise, and slide in to the warmth and wonder that is Bourbon Barrel Aged El Paraiso.”

Appearance: Pitch black with a thumb of tan foam perched on top. The head holds together well and draws a nice lace as we imbibe.

Aroma: Don’t know how many times we’ve said this over the years but the combination of coffee and dark beer makes for one of the best aromas known to man! Then add cocoa nibs to the mix and it’s a feast for the senses. It’s further complimented by a direct vanilla sweetness, woody oak and a distinct bourbon character from the barrel aging process. Caramel/toffee, maple syrup and coconut also creeping in as it warms. Good god!

Flavour: Plenty of bourbon, warming booze and woody oak tannins but where has all the decadent coffee, caramel and vanilla sweetness gone?! We can detect a bit of it but the intensity has completely dropped out. Some of the coffee tails in late but it’s more of a bitterness that pairs up with a hearty roast to finish things off. Good length on offer though.

Mouthfeel: Dense, oily and aggressive…the latter spurred on by the 11.5% AbV. Carbonation is low and the body is as full as a goog.

Overall: Brilliant aroma…not so brilliant palate. Which is such a shame because there was so much potential. That’s the 2nd one in as many weeks! We found the Dark & Stormy had the same issue. Thankfully we still have the Milk & Cookies to come – let’s hope it can break the cycle.