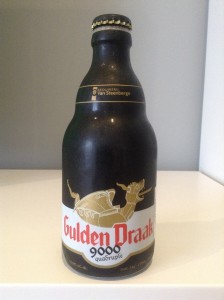 “The legend says the gilded dragon first featured on the prow of the ship with which the Norwegian king Sigrid Magnusson left on a crusade in 1111. He offered the statue to the emperor of Constantinople (the current Istanbul) to put it on the cupola of the Aya Sophia. Some hundred years later, the Flemish count Baldwin IX had the showpiece transported to our regions. Here, the Norwegian dragon ended up in the hands of Bruges. After the battle on the field of Beverhout in 1382, the inhabitants of Ghent took the dragon as war booty and put it on top of their Belfry. In the Belfry all communal charters were kept. The dragon had to protect these documents and it was also the symbol of the freedom and might of the city.”

Poured into a snifter glass. The appearance displays a deep amber that reveals attractive ruby red hues when held to the light. The big, bubbly two and a half finger head holds well but gradually reduces, leaving patchy lace trails down the glass. The aroma is boasting a rich Belgian yeastiness, fruit esters, clove, banana, plum, raisin, toffee and booze. Brilliant. Medium carbonation with low bitterness and a frothy mouth feel. Full bodied on the palate, it’s initially sweet with sugary fruits (dates, raisin) and a subtle alcoholic astringency. A doughy mid-palate is quickly overpowered by alcohol warmth and a yeasty, fruity back end. Slightly syrupy in the finish which we found to be the only downfall to this decent Belgian quad. 10.5% ABV is high but spot on when talking Belgian quadrupels. It’s no Trappist, but its still a quaffable Belgian beer. Delicious.