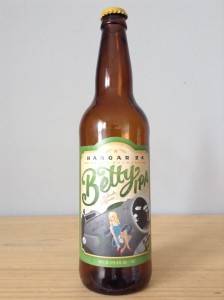 “Betty is an American IPA boasting a blend of Mosaic, Citra, Simcoe and Centennial hops. We spent 8 months perfecting this hop blend, and we love the huge range of juicy aromas and flavors we were able to hit. The beer’s name pays homage to the pin-up art that adorned the planes of American B17 pilots during World War 2. These pilots would commission these fantastic works of art on the noses of their planes, and it serve as a daily reminder of the home they were fighting to protect.”

Served in an IPA glass. Quite a cloudy amber hue meets the eye. It’s a little messy in there, flecks of suspended sediment float around as a steady stream of bubble courses upwards toward the two finger head. It retains well, peeling off a cm or so as it deposits a sticky lace on the glass.
The aroma reveals soft, ripe tropical fruits like mango, pineapple, rock melon, papaya, lychee and guava. Reminds us of the Knee Deep brews we’ve been indulging in a lot lately. Waves of orange citrus, slightly dank pine, subtle spice and a chewy caramel malt backing round out this typical but very pleasant Californian IPA.
There’s some nice weight in the mouth, a plump body enjoys a sticky texture with a good Co2 level. The booze doesn’t show through much, either does the 68 IBU.
Upfront the sweet orange citrus is nice and direct as it washes over the palate. An edge of pine and a fleeting hint of grapefruit hit a bitter note in the middle. It adjusts with a cameo of caramel malt that leads to a piney, somewhat clean and citrusy finish with reasonable length on the back end.
We like it. Well, it’s an American West coast IPA after all! The difference is the unique concept of WWII style fighter jets on the strip that actually drew us in. But it’s backed up by a set of quality aromas and flavours. Thumbs up from us.