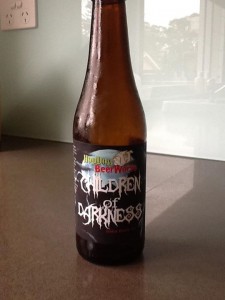 “India Black Ale. Big, roasty, chocolatey and with hints of coffee from a judicious use of dark and roasted malts, followed by citrus and pine from the ludicrous amounts of NZ, US and Australian hops used in all aspects of this infernal brew. A modern classical style”. Off with the characteristic green cap and served in to an IPA glass. We seem to get this a lot from Hop dog beers – even without pouring aggressively we end up with a glass full of foam. No joke, it poured straight from the bottle and filled our whole glass with foam. Following a strenuous test of our patience the glass full of foam eventually broke down and formed a jet black appearance with a ridiculous amount of lacing left clinging to the glass. Although still quite heady, a gorgeous waft of sweet, candi sugar graces our olfactory’s. Reminds us of our youth when we used to ruin our teeth by eating raspberry and black currant roll ups. (For those that are unfamiliar with roll ups, they were a sugar-laden piece of semi dried glucose which took about half an hour to chew) oh they were good though. Streaming through the sugary sweetness is a subtle roasted malt backbone with a suggestion of chocolate fruitcake and coffee bean. Hops are presented quite well too…..slightly resinous, slightly juicy, also giving off a mild citrus tone too. Very complex nose. We’re liking it. In the mouth it’s highly carbonated with a frothy texture. Would be on the fuller side if not for the Co2 levels. Once this beer warms and the fizz settles it actually becomes a pretty tasty drop. The taste buds are treated to a cameo of light malts upfront before the sweet, juicy hops develop through the mid, bringing with them an assertive bitterness that takes hold of the tongue. That candi sugar character we mentioned before on the nose comes in to play in flavour too as it carries forward and finishes bitter and roasted on the back end. The ABV is well disguised by the firm hop presence but we do get a slight astringency in the finish. Essentially, a reasonably good BIPA. A little erratic at first but once it settled it was enjoyable. A competitor in the 2012 GABS beer festival so this drop can lay claim to to it’s own fame. Good enough to enjoy but just missing that killer blow to be a really good beer.