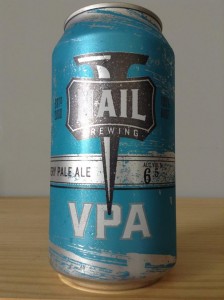 Served in a shaker glass. The name “very pale ale” becomes apparent once it’s poured as we’re met with a super hazy mustard hue that tops off with a two finger crown. Head retention is good, holding its shape and weaving a healthy lace down the walls of the glass.
Boom this smells incredible! In fact, that actually smells better than a lot of IPA’s we’ve tried. It’s absolutely choc-a-block full of juicy tropical fruits like grapefruit, pineapple, passion fruit, citrus and peach. Pretty heavy on the pine resins too, hinting at spruce in its delivery. Some spicy notes in here too. It even has a subtle layer of stone fruit in there. Not getting much in the way of malt but who needs it when the hops are singing like this?!
Nicely tempered mouth feel. Nothing aggressive with the 6.5% ABV being contained quite well. Mild-medium body. Pretty smooth overall texture here.
Much like the aroma there’s an explosion of hop flavour on the front palate. All those juicy tropical and citrusy fruits extend far past the mid with what could be described as a very subtle buttery/biscuity malt at the base. The flavour really mellows in to an uber smooth finish with just a hint of dryness on the rear.
Really interesting drop this one. For what presents as such a big, hoppy and aggressive beer it actually drinks with a very smooth and accommodating palate. We wonder if this “VPA” thing could possibly catch on to fill the void between XPA and IPA? Hhhhmmmm food for thought.