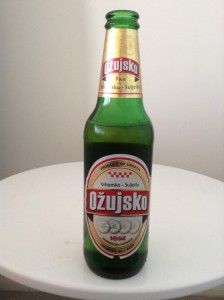 Croatia isn’t really known for their production of craft beers but when we see one come along we have to try it.

Served in a flute glass the clear golden pour boasts exceptional transparency. Capping it off is a compacted white head that peels off quite quickly leaving a lonely patch of foam in the middle of the beer. Pretty much all we can get off the nose are Noble and Saaz style aromas of light herbs and grassy notes. Light biscuit malts and rice crackers also come through softly. Standard as. Mouth feel is light on with a thin texture, mild carbonation and mild-medium body. Flavour is crisp, clean, hoppy and a touch metallic with a soft bitter finish. 5% ABV. As any craft beer drinker knows there isn’t a lot of experimentation with pilsners (especially the European ones) so there isn’t a lot of variation. Very approachable (unlike my first girlfriend’s Croation father). But there is one thing for sure, and that’s that they are sessionable and great for hot days accompanied with seafood. Very clean and very sessionable pilsner. Almost identical to the Czech budvar or pilsner urquell and even more similar to the Karlovacko. Average at best.